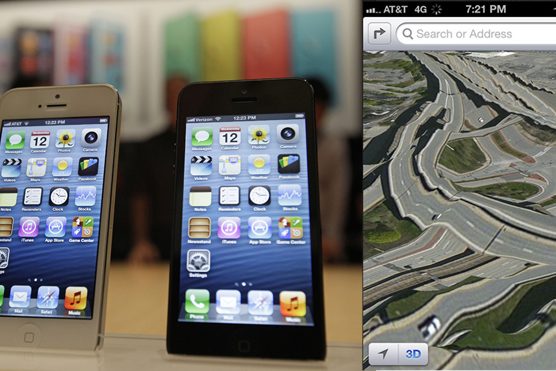 And lackluster may be a bit of an understatement. Although thousands are lined up to buy Apple’s new iPhone 5 and thousands more have already exited the checkout line with their lighter, thinner smartphones in hand, universal criticism has been brought down on a key feature of the new iOS6: Apple Maps. NBC News is calling it an “epic fail”, and a summary of the situation has been offered by Reuters:

“An entire city is in the ocean, a farm has been labeled as an airport, highways end in the middle of nowhere and a hospital now covers the entire center of British city Stratford-upon-Avon.”

If you can’t tell from that description, the main problem is that people are having a really hard time finding their way around with Apple Maps, defeating the entire purpose of the app. Points of interest are missing or incorrectly named, directions are incomplete or just plain wrong, and the otherwise-beautiful 3D Flyover feature is marred by bridges and other features that look like they’ve recently suffered destruction.

Millions will probably have iOS6 by the end of the day, so how will they find their way around? The answer would be simple except for the fact that the iPhone 5 no longer includes a Google Maps app, and the current version of it isn’t even compatible with iOS6. For now, many users are navigating to Google Maps manually in the iOS6 web browser, though few would like to make that their long-term solution for figuring out how to get from point A to B.

Apple released a statement to Search Engine Land and other tech industry sites reminding people of the good aspects of Apple Maps (Flyover, Siri integration) while ensuring users that things will get better from here:

“Maps is a cloud-based solution and the more people use it, the better it will get. We’re also working with developers to integrate some of the amazing transit apps in the app store into iOS 6 Maps. We appreciate all of the customer feedback and are working hard to make the customer experience even better.”

Google Maps App on the Way?

Search Engine Land speculates that Google may have already submitted a new Maps app of its own to Apple for approval, but that Apple may block its release to keep users relient on Apple Maps. Of course, doing so could backfire at a time when many people, tech reviewers and end users alike, aren’t too happy with Apple as it is. At the same time, it’s possible that Apple will quickly release an update to Maps before Google even has a chance to produce one of their own for iOS6.