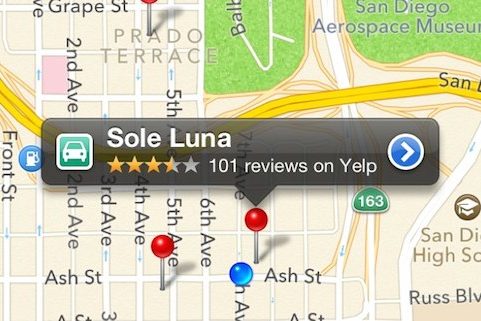 When it comes to business recommendation sites, Yelp is undoubtedly the leader. It currently has around 86,000 local business accounts, and it attracts 135 million monthly visitors. Companies strive for good reviews on the site, as Yelp ratings can have a huge effect on sales.

The Apple Maps app, despite its rocky start, was attracting around 35 million users at the end of 2013. When displaying local search results, the app would only ever show Yelp ratings – until now. This change is important for small businesses, and it comes at a time when Yelp’s reputation is taking some hits.

As was first noticed by AppleInsider, Apple Maps is now returning reviews from sites like TripAdvisor and Booking.com in its search results. Yelp reviews have not been replaced, but they’re no longer the only source of ratings provided. Sites other than Yelp appear to be showing up largely in international searches, but some searches within the U.S. are returning them as well. Specifically, TripAdvisor ratings are showing up largely for restaurants while Booking.com ratings are being displayed for hotels.

At this point, SEOs can only speculate as to why this change is being made. It’s thought that Apple simply wants to diversify review sources to give users as much information as possible and to address any gaps in Yelp’s reviews. At the same time, it’s possible – however unlikely – that Apple is moving away from using Yelp entirely. Either way though, local business who rely heavily on user reviews should start paying more attention to sites other than Yelp if they’re not doing so already. Yelp will likely stay on top for the foreseeable future, but it’s grip may be loosening.

Apple’s move doesn’t appear to be in reaction to any controversial incidents, but Yelp has nevertheless been the subject of many recently. In just the past few months, Yelp has been accused of pulling good reviews after a profile was spammed. Two infamous restaurant patrons were publicly shamed for threatening poor Yelp reviews while trying to get a table at a restaurant without a reservation. Another restaurant owner encouraged Yelpers to leave one-star reviews after feeling blackmailed by Yelp’s policy of displaying paid ads above organic search results.

For years, there’s been talk of Yelp ratings being skewed by fake reviews. There’s even a documentary under way titled Billion Dollar Bully, which aims to explore alleged manipulation of small businesses and unfair practices overall. While it’s unclear if any of these situations will lead to changes in Yelp policy, one thing that won’t change is the importance of Yelp reviews to small businesses. So, any business that has a Yelp profile would do well to keep a close eye on it and stay up-to-date with Yelp news to ensure that the platform is actually helping your company instead of hurting it.