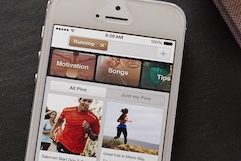 Pinterest, the popular online tool used to discover images and articles related to various interests and creative endeavors, will soon be bringing its well-received “guided search” function to its web version. Guided search was previously only available in the mobile app.

As it continues to grow, Pinterest has been attempting to aid its users in sorting through the billions of pins and millions of boards currently available on the network. Guided Search could make the discovery process much easier for users, while making Pinterest on the whole much more navigable.

According to Pinterest’s blog, the Guided Search function is “made for exploring.” Whereas a typical search engine like Google or Bing is good for answering a specific question, Pinterest’s guided search is intended for exploratory questions and situations where several different suggestions might be sought by a user. For example, Guided Search could help a person decide what to make for dinner, what hairstyle to get, or where to go on vacation.

The Pinterest search function currently has a standard setup whereby a user enters a query and relevant pins are returned as results. With Guided Search, Pinterest will suggest sub-categories for the user to look through after entering their search. For example, if you were to enter “barbecue chicken,” Guided Search may return descriptive guides such as “crockpot,” “recipes,” “pizza,” “sandwiches,” and “oven,” in order to further narrow your search or help you discover other aspects of your topic you may not have thought of. The visual guides will appear as small boxes near the top of the screen, underneath the now-more-prominent search bar and above the search results.

What Will This Mean for Marketing?

As it’s already a success on mobile devices, the public response to Guided Search on the web is likely to be very positive. For businesses, Guided Search simply represents yet another reason to pursue a Pinterest marketing campaign. While the idea of marketing on Pinterest is relatively new, you don’t need to look much further than the Pinterest profiles of big brands such as Lowe’s, Whole Foods, Self Magazine and L.L Bean to see how beneficial a well-organized and enticing Pinterest account could be. L.L. Bean in particular has around 5.6 million followers with boards such as “Woodland Creatures,” “Outdoor Fun,” “L.L. Bean Selfies,” “National Parks” and many more. Pins of their products have no doubt brought them business.

You might recall a statistic from an article we posted back in November of 2013, which stated that one pin on Pinterest is worth about $0.78. This amount is considerably more valuable than either a Facebook post or a tweet. As Pinterest grows and develops, it’s likely to become a major player in the online marketing world.

Guided Search will roll out in the next few weeks. For a quick look at the new feature, check out Pinterest’s Guided Search about page.