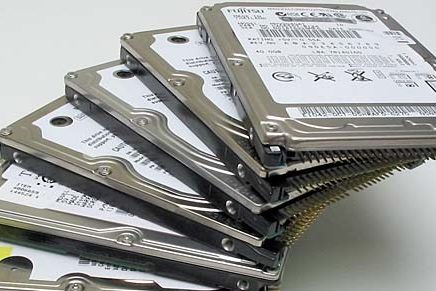 How to Safely Trash Your Old Hard Drives

The majority of homes and businesses have some form of wireless broadband service. In other words, an “always on” connection. What this means to the unethical hacker is that they have an around the clock ability to scan your server or home computer for vulnerabilities and thereafter, compromise your system(s).

If you are the type of individual who keeps a close eye on the security of your computer, network, and web browsers then you most likely go to great measures – some would say even paranoid measures – to secure the data and information on your computer.

In keeping with your security precautions, do not even think about just throwing your hard drive in the trash when the time comes to dispose of it. Why should you not simply discard your old computer hard drives?

Two Reasons Not to Throw Your Old Hard Drives in the Trash:

You could manually delete all the files on a hard drive by spending hours erasing folder after folder, but your efforts will be in vain if you discard the device and the right kind of crook retrieves it. When directories and files are “deleted,” this simply means that a pointer to the directory or file was removed; its data is actually still there.

Plenty of file recovery tools and hard drive imaging software exists to reconstruct whatever data the drive once contained. In almost every case, such efforts do not produce a full copy of the deleted contents, but data recovery rates as high as 90% are not that uncommon.

A marketing and creative branding firm in San Diego, California known as Mad Media lost access to over 8TB of customer and company data due to a series of power surges that damaged their drives, rendering the data irretrievable. How much data is eight terabytes? The Library of Congress houses just over 10TB, so that should speak to the size of the loss – 8TB is an incredible amount of data.

The professionals at DriveSavers Data Recovery were able to use their forensic expertise to recover enough of the critical data to reconstruct the directories, critical files and customer data. And they did this in just two days.

Many data recovery tools similar to those used in the Mad Media case are freely available to tech-savvy criminals, so be sure to use a program that does more than just make data inaccessible. Two tools, DBAN and Blancco, can ensure that data on a hard drive is unrecoverable by anyone except a true expert.

DBAN, short for Darik’s Boot and Nuke, is a free program that you burn to a CD or DVD and keep in the optical drive when restarting the computer. It provides five options for securely obscuring the contents of a hard drive: Quick Erase, Canadian RCMP TSSIT OPS-II Standard Wipe, American DoD 5220-22.M Standard Wipe, Gutmann Wipe, and PRNG Stream Wipe.

Without getting too technical, each option wipes the drive a certain number of times, from three to thirty-five passes. DBAN supports UNIX and its derivatives, from Linux to *BSD to QNX as well as virtually all 32- and 64-bit computers, and almost any hardware from IDA and PATA to SCSI disks.

Blancco performs similarly to DBAN, but the company offers robust versions of its software for data centers, servers, home computers and Flash media. Most notably, Blancco comes with management consoles for auditing and reporting – it even has a cloud-based option.

The Threat of Identity Theft

Bank account records, employee information and other sensitive data can be recovered unless the tools recovering that data see gibberish instead of complete and partial files. If a criminal can use forensic tools to reconstruct only a few files from your discarded hard drive, there is a chance that sensitive and revealing data may be recovered, stolen, and used for nefarious ends. After working so hard to keep the network safe, staying updated with the latest virus definitions and security patches, it would be a shame to have that data compromised after getting a new hard drive. Shred your drives with DBAN, Blancco or similar software to avert such a catastrophe.

Even better than using software to erase and jumble hard drive data into meaningless trash is to use hardware – a drill comes to mind – to physically destroy the drive itself. A hard drive with several holes drilled through it is totally useless, without exception. This process is hazardous though, which brings us to…

Personal Safety When Destroying a Drive

You need a ventilated area, a sturdy pair of work gloves, a drill, face mask, and protective eye cover to destroy a hard drive. Secure the drive firmly, either in a vice or on a surface you can drill holes through. Drill six to eight holes through the disk in a circular fashion, making sure the drill bit exits the other side each time. The drive will then be worthless and its data will be irretrievable. Do not inhale the particulate matter from the drill shavings; there are small amounts of lead in its solder, as well as some silicon and other toxins.

The safest, and arguably most ethical, method of disposing of a used hard drive is by paying experts to do the work for you.

Leave It to Professional Services

Why is hard drive destruction best left to the pros? Well, have you ever heard of an Oersted degausser? It removes the magnetic field (the data) on a hard drive. This method of drive sanitation is preferred by the Department of Defense (DoD) and the National Security Agency (NSA). Their hard drives are temporary homes to Classified and Top Secret data, and if the methods they use are believed to securely wipe a drive, that is something to consider.

Companies that specialize in hard drive destruction use a four-step process. Some use five or six steps, but the basics are: safe disassembly, degaussing, removing magnetic media with plasma cutters, and ethical recycling. The recycling ensures that hazardous waste such as cadmium, beryllium, brominated flame retardants and other toxins are placed where they belong. A single hard drive does not contain exorbitant amounts of these problematic toxins, but enough to warrant recycling the device correctly.

The EPA states that according to a 1998 National Safety Council Study, about 20 million computers were obsolete after just one year. In 2007, that number doubled to over 40 million. The fact that people are constantly needing to get new, updated electronics corresponds with the fact that, as of 2007, “e-Waste” made up 2% of municipal waste, and that percentage has been rising.

When we dispose of hard drives the right way, either on our own or via expert services, we negate the possibility of identity theft and the certainty of environmental harm in one fell swoop.