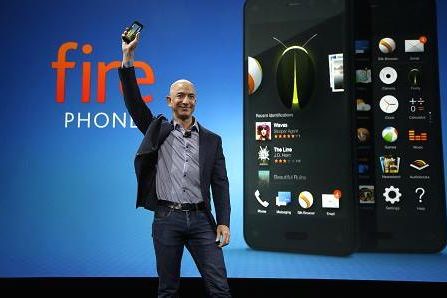 In a move that has been rumored about for some time, Amazon has finally thrown its hat into the smartphone ring. Amazon CEO Jeff Bezos unveiled the new device today at a Seattle press conference, and the new phone promises some very innovative features.

As far as basic specs go, the Fire Phone is Android-based with a 4.7-inch high-definition display. It boasts a 13-megapixel camera and a quad-core 2.2 GHz processor. Purchasing the phone will also get you one free year of Amazon’s premier membership program, Amazon Prime. People who already have Prime can get their next year free.

One of the most interesting things about the new smartphone is a feature called Firefly, which allows a user to point the phone at an object and get more information about it immediately. Similarly to reading a QR code on a currently available smartphone, Firefly lets a user snap phone numbers, bar codes, DVDs, books, URLs, household products and much more. For example, if a user were to snap a painting, Fire Phone would be able to bring up the Wikipedia entry about it immediately. If a user wanted information about a song that was playing in a restaurant, they could simply snap some audio of it and the phone could take them to Amazon’s store to buy it. This is somewhat similar to the current Shazam app.

While it’s uncertain at this time if consumers will flock to the Fire Phone because of this feature, it can be said with some certainty that at least one group of people will hate it: retailers. The practice of “showrooming” – comparing prices in a physical retail location to prices online using a smartphone while shopping – is already common, but it will be made much easier with this feature.

The display of the Amazon smartphone will essentially be in 3-D. Known as Dynamic Perspective, this feature makes it so that a viewer’s perspective of the screen will change depending on the angle at which they’re seeing it. For example, a user might be able to look at a 3-D map of a city from above while being able to move their head to see around the virtual buildings. Bezos maintains that this feature will lead to all sorts of innovations in gaming as well as standard smartphone use.

Another part of this feature allows users to tilt the phone to perform various functions. While looking at a 3-D map of Seattle during the press conference, Bezos tilted the phone one way to see restaurant search results and another way to see Yelp reviews. Because of Dynamic Perspective, users will also be able to tilt the screen instead of scrolling while reading books or news articles.

So what do you think? Will Dynamic Perspective forever replace scrolling and flat images on smartphones? And will Firefly prove useful, or is it just a way to keep people buying at Amazon?