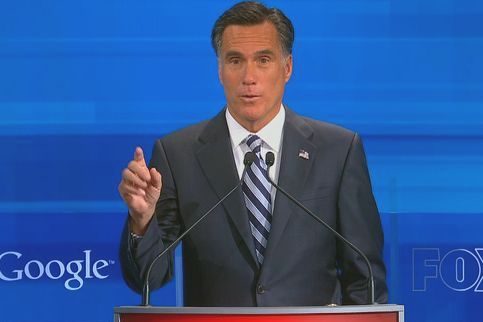 If you have conducted a Google search for the phrase “completely wrong” anytime within the last several days, the image results that are displayed from a Google search may have convinced you that Google is on a mission to deface Mitt Romney’s campaign, one search query at a time.

Rather than a variety of different and unrelated images associated with being “completely wrong” – say, a picture of Honey Boo Boo’s mother’s big toe, for example – the image results are all related to Mitt Romney, all the time. Or at least they were.

If you perform the search right now, the image results are still very Romney-centric, though about half the results above the fold are actually screenshots of a Google image search for “completely wrong,” with Mitt in nearly every thumbnail. So what started this phenomenon that has already fallen into parody?

According to Philip Rudy of ImageWorks Studio, the phenomenon stems from a classification that Google gives to certain news-worthy queries: QDF, which is short for “Query Deserving Freshness.”

Although the exact nature of Google’s algorithms will forever be mysterious to SEOs, we do know that the search engine accounts for the “freshness” of a piece of content when deciding how to rank it. This is why bloggers and site developers who regularly post new, unique, timely content often find themselves comfortably near the top of Google’s search engine result pages.

As the name suggests, a query can only be classified as a QDF if its very nature calls for an emphasis on its freshness rating.

So how did “completely wrong” become a QDF? Thank the media. Shortly after the first presidential debate of the electoral season, Mitt Romney took to the airwaves to declare that he was “completely wrong” in his comments about the 47%. Every major news outlet picked up on the story, and the vast majority of their headlines had the same phrases in common: “Mitt Romney,” “47 Percent” and “Completely Wrong.”

Based on this, Google’s algorithms determined that these terms were not only very closely related, but also highly relevant to immediate current events, and therefore highly deserving of a heavily-weighted freshness score. The image results for “completely wrong” draw first and foremost from these major news articles, which virtually always show at least one picture of Mitt Romney.

The message for SEOs is pretty clear: if you want to boost your rankings, make sure your site is frequently updated with fresh, timely content. If at all possible, take something that’s wildly popular and find a way to connect it back to your niche. And, finally, don’t forget the power of a great image alongside your text content — you never know when it will show up in Google image search and drive even more traffic to your site.