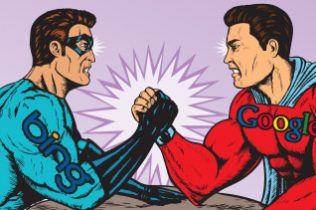 Previously we discussed how Google’s global search market share had dipped slightly in December of 2012. Although we do not have more recent data on how Google fared against their competitors, we do know that they have rebounded, at least in the United States.

New data from comScore indicates that Google returned to a solid 67% U.S. market share in January of 2013, the same marker they hit in November 2012. Bing also had a positive month, while Yahoo, Ask and AOL all experienced measurable drops in market share. Will Google edge closer to 70% as the year continues?

Here’s a quick glance at where all the major search engines stand as of January 2013, compared to where they were the previous month:

Google’s gains largely came at the expense of smaller search engines. Although Bing made some significant gains, it’s important to remember that Bing and Yahoo still have an ongoing partnership for search. Combined, the two are at roughly 28.7% market share – nothing to scoff at, but not a reason to take your primary SEO efforts away from Google.

Total Searches Way Up in January

Month to month, all search engines increased search volume by 7% to 12% except for Ask, which only fielded two million more searches in January than in December.