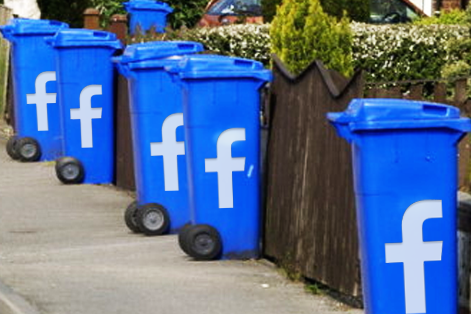 Earlier this month, Facebook announced that it would be significantly reducing the reach that promotional page posts get in followers’ news feeds. In response to user feedback, “overly promotional” updates from pages will get much less organic reach starting next year.

Combined with the facts that brands are already seeing steep declines in organic reach, and Facebook advertising is suspected by some to be worthless, it’s easy to see why respected marketing research firm Forrester is recommending brands move away from Facebook marketing completely.

What are Overly Promotional Posts?

The posts that Facebook is referring to are not paid advertisements. They’re regular posts from Pages that are typically of an advertising or promotional nature without much additional value. Examples that Facebook gives include:

The Facebook Newsroom also provides this screenshot as an example:

It’s not entirely clear at the moment how Facebook will determine which posts are too promotional. In a separate post, Facebook explains how business pages are still important for companies despite this change. According to the post, almost one billion people visited various Pages just last month, and Facebook plans to continue developing Pages with customizable features for businesses in different industries.

Facebook’s announcement might not seem that bad, especially if your company doesn’t typically post promotional updates and instead focuses on high-quality content. However, a recent Forrester report indicates that this announcement is just the latest in a string of events that proves Facebook marketing is a waste of time. In their paper, “Social Relationship Strategies That Work” (available here for $500), Forrester outlines some pretty dismal numbers. According to one study, brand pages only reached about 25 percent of their followers per month organically. The numbers for other page types such as celebrity pages and news media pages saw organic reach in the range of 54 to 58 percent during the study. Only .073 percent of the fans for top brands actually engage with any post on average, according to the report. Twitter, which is also taken to task, sees an engagement rate of only .035 percent.

The Forrester report doesn’t necessarily suggest giving up on Facebook entirely. Rather, it seems to indicate that the time spent marketing on the platform will simply outweigh the results in the future. Indeed, out of the marketers surveyed in the report, only 55 percent of them indicated they were satisfied with their Facebook marketing results. As an alternative, the report suggests that Facebook should be thought of less as a tool for social engagement with customers and more as a display ad platform like Google. The paper points to examples of how smaller, niche networks can be an incredibly successful alternative. One such example includes EngineerZone, which is an idea-sharing community created by semiconductor manufacturer Analog Devices. These smaller networks comprised of like-minded individuals are definitely becoming more and more popular.

Of course, not everybody agrees with the Forrester report. As Doug Schoen points out in Forbes, the survey research is limited and doesn’t necessarily indicate that Facebook marketing should be abandoned. Joe Lazauskas of Contently goes so far as to suggest that the new Facebook algorithm, as well as the Forrester report, are actually good news for content marketers. Not to mention, the millions of dollars being spent on Facebook marketing and advertising seems to show that it’s working for someone.

So, if the content your company posts is consistently engaging, you don’t really have to worry about Facebook’s impending update. However, the Forrester report is nonetheless food for thought. For now, it seems as though boosting posts that contain great content is preferable to paid display ads or free promotional posts when it comes to succeeding on the network. At the same time, it’s important to always remember that likes and followers are just vanity numbers – the proof is in the pudding. If you’ve put the requisite time into Facebook marketing and it’s just not improving your business, it’s perfectly ok to shift focus onto efforts that actually deliver results.