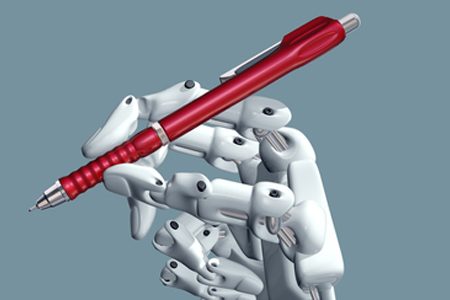 Will Article Writing Software Put Journalists Out of a Job?

It’s a question that’s been asked thousands of times in many different ways: will robots eventually perform every human task? While it’s looking more and more like the answer could be “yes,” many would argue that technology could never replicate human creativity. For example, artificial intelligence could never paint the Mona Lisa or write Moby Dick.

Not so fast, though. Article writing software is likely being used by someone right as you read this, and the text it’s creating is indistinguishable from a human’s.

As of this writing, Wikipedia hosts well over 4.6 million articles. On a site that attempts to maintain scholarly, encyclopedic information throughout, certainly all of its content was written by a human, right? Wrong. According to Popular Science, around 8.5 percent of Wikipedia articles were written by a robot – one robot, to be exact. The article writing software is known as Lsjbot and was invented by a Scandinavian scientist. The bot is capable of gathering information from various reputable sources and assembling the material in a coherent way. The entries are usually very short, and they often involve topics such as zoology or small town statistics. The technology has already written around 2.7 million articles for Wikipedia, coming out to around 10,000 articles per day.

Then there’s Quakebot. Developed by a Los Angeles Times programmer and journalist, Quakebot is software that uses U.S. Geological Survey earthquake data in order to create a readable article capable of being published seconds after the event occurs. The bot cannot report on things like damages or injuries, but it’s definitely successful in getting out basic earthquake information to the public more quickly than any human writer could.

If this all seems trivial, keep in mind that the Associated Press has been using “automation technology” to create thousands of articles for months. Companies like Automated Insights and Narrative Science are increasingly trying to create article writing software that effectively automates the content generation process for large organizations like AP.

Writing Automation Has Been Long Been a Dream

People have wanted to automate the writing process for hundreds of years. Consider “The Writer,” a human-like automaton created by a Swiss watchmaker all the way back in the 1700s, which could create custom notes using a quill and ink. More recently, article spinning software has allowed people to automatically generate several different versions of already-written content. This allows people to post slightly different articles on many different web pages for SEO purposes without any of the pages being penalized for duplicate content. Of course, the practice was considered shady a few years ago and is downright black hat by now. Nevertheless, there are still a ton of article spinners available on the web.

Think about it for a second: is “Quakebot” really any different from “The Writer?” A human created it, “programed” it, and the bot returns a readable piece of content based on its programing. That may be an oversimplification, but the point is this: so far, current article writing software can compile already-available information in a useful way, but it can’t necessarily analyze, evaluate or comment on it. The software is getting better and better (article spinners aren’t even remotely on the same plane), but it will likely be a long, long time before bots can “tell a story” like a journalist could. In fact, article writing software could actually save journalists time by automatically creating standard, fact-based reports, allowing the journalist to concentrate on other things in the mean time. So, while it’s possible that certain writing tasks could eventually be entirely automated, human publishers and content creators aren’t going anywhere.