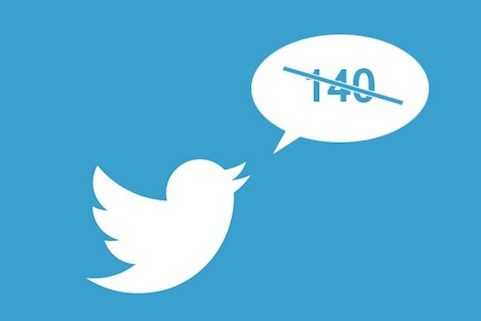 Last week, it was reported that Instagram now has a community of over 400 million active users, which makes it officially more popular than Twitter. This is just the latest in a string of not-so-great news for the network: its value has plummeted since its IPO in 2013, its growth has flatlined, and many of its new users are quick to abandon it.

In an effort to combat all this, Twitter has revealed some new features such as Moments, which will make users’ timelines more organized and easy to understand. For content creators and marketers, however, the most important change involves the famous 140-character limit.

The 140-character limit on Twitter is considered one of its fundamental features. It has allowed the network to become famous for all sorts of short-form communication between large groups of people, including breaking news updates, live event updates, social commentary and much more. However, when it comes to content marketing, Twitter is not often the number one place to turn. While the 140-character limit has caused marketers to get Tweet-writing down to a science, people that want to market using effective content strategies simply can’t do much more than link to a long-form piece on the network. This has likely caused many companies to either see a low ROI with Twitter or avoid the network altogether.

As reported by re/code, however, much of this could change. People familiar with the future of Twitter have said that the 140-character limit could become a thing of the past, allowing for more substantial content to be posted on the network. Of course, certain elements of Twitter have moved beyond the limit already, such as the “retweet with comment” feature and private messages. Twitter has also openly discussed the idea of excluding user handles and links when limiting Tweets. At this point, it’s not known whether or not longer Tweets will be a global change or simply part of a standalone service.

What This Means For Marketers

If Twitter does indeed remove the 140-character limit, it might mean treating the network similarly to Facebook. In other words, posting longer content less frequently may become the norm. Right now, companies are finding success on Twitter by posting three or more times per day, while anything over two posts per day on Facebook will have very little or even negative effect. Also, longer Tweets may cause Twitter to gain more users, meaning that it could incentivize your company to join the network if you haven’t already. Despite many claims that dropping the 140-character limit would essentially ruin what makes Twitter great, it can’t be denied that longer Tweets could lead to bigger audiences.

Many things will likely stay the same, however. For example, images and video will still be extremely popular regardless of the length of text within a Tweet. Good use of hashtags and quality, engaging content will still be of utmost importance. Even if the limit isn’t dropped, though, the fact that it’s even being considered is representative of a current trend towards longer content in social media. Facebook’s Instant Articles is going strong, as are things like Snapchat Discover and LinkedIn Pulse. Basically, if there’s anything marketers can learn from this decision, it’s that quality, in-depth content may become just as important on social media as it has been everywhere else on the Internet.