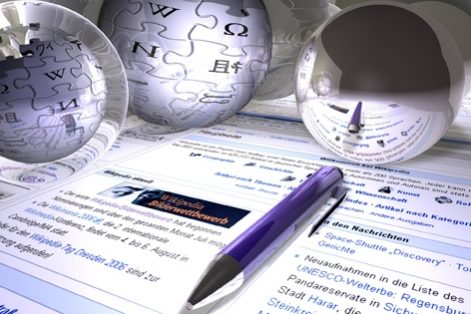 Defending a Giant: Why Wikipedia Doesn’t Get the Scholarly Credit it Deserves

In 2006, Emmy award winning comedian Stephen Colbert infamously introduced the concept of “Wikiality” on his show, The Colbert Report. Colbert poked fun at the concept of Wikipedia by editing an article on the air and stating, “…any user can change any entry, and if enough other users agree with them, it becomes true.”

He then called on viewers to change the “Elephant” entry on Wikipedia to state that the population of elephants has tripled in the last six months. This caused Wikipedia entries like “African Forest Elephant” and “Babar the Elephant to be edited within minutes.

Wikipedia had to lock down several articles, and the “Elephant” entry is still semi-protected. Colbert humorously pointed out that Wikipedia could potentially be a bad source of information. However, Wikipedia has many redeeming qualities, and when it’s used with the correct mindset, it reveals itself to be an excellent service that deserves more respect in the scholarly community.

How Wikipedia Gained its Negative Reputation

It’s no surprise that students taking classes at universities are increasingly using the Internet to conduct research. However, professors and teachers have mixed views regarding whether or not Wikipedia can be classified as a credible source, mainly due to the fact that literally any Internet user can edit, add or remove information from the site at any time.

Jonna Mackin, professor of English at Dartmouth University, stated in 2006 that Wikipedia is “not a viable academic resource because there is no vetting of the people who post to the site.” Similarly, the history department at Middlebury College in Vermont collectively voted to ban students from citing Wikipedia as a source in any academic work in 2007.

Wikipedia’s universal editorial access can not only lead to unverified information being published on the site, but it can also lead to blatantly incorrect statements. For example, on January 20, 2009, Senator Edward Kennedy was brought to Washington Hospital Center after suffering from convulsions at President Obama’s post-inaugural luncheon. The chairman of the hospital eventually reported that Kennedy was fine; however, before that announcement had been made, Kennedy’s Wikipedia entry had been edited to claim that the senator died.

At the same time, Senator Robert Byrd’s Wikipedia entry stated that he had also collapsed at the luncheon, and a death date was listed on the site as January 20. Neither of these claims were true; however, it should be noted that these mistakes were corrected within minutes. It does become a bit tough to keep up with users as wireless Internet becomes more readily available and technology allows users to edit a Wikipedia page within seconds of a current event.

While the possibilities of unverified and incorrect information continue to be the most important reasons why Wikipedia has a negative reputation in the academic world, other factors such as potential errors of omission and large acts of site vandalism are also considered.

The very first sentence of Wikipedia’s Academic Use Essay states that “Wikipedia is not considered a credible source,” meaning that the people behind Wikipedia understand that their content should not be cited in academic work. Rather, the public must understand that Wikipedia is like any other encyclopedia – a starting point for gaining general ideas about certain subjects before delving deeper and using more detailed, authoritative and carefully reasoned sources. These types of sources can often be found in the References section that is included at the bottom of most Wikipedia articles.

So, while Wikipedia agrees that it is not an authoritative source, this doesn’t mean that they do not strive to keep their content as accurate as possible. Wikipedia currently has over 1,700 administrators that are in charge of:

Administrators can be contacted by any Wikipedia user if there is a dispute about an article. They can also be contacted if vandalism is detected, whereby the admin can lock the page and prevent it from being manipulated further.

Every Wikipedia article contains a related discussion page, where users can communicate about the content of the article, and disputes over certain topics can be resolved in this setting. Each article also contains a history page where a user can see all of the edits that have been made concerning the article. Additionally, every reader has the option of adding a template message at the top of an article. These messages act as alerts that warn a reader about the content being inadequate in some way.

For example, a user can suggest that an article does not provide enough relevant sources or that the article needs to be cleaned up in some way. These alerts inform the reader immediately that the content is in the process of becoming more accurate, and it may not necessarily be a good idea to use it for research.

An important thing to consider about Wikipedia is that fact that, since it is edited by so many different people, it largely leads to the creation of neutral information. For example, external links and references on a Wikipedia article could provide a chance for commercial third parties to get a link on a site that sees a ton of traffic. However, with over 13 million account holders that have the potential to review these links, any questionable sources or links will likely end up being removed.

As per Wikipedia’s content policies, verifiable sources include academic, peer-reviewed publications as well as respected mainstream publications, journals and textbooks. Users can also post a template message to warn a reader that an article appears to contain biased information.

Wikipedia is also unbiased in their funding. Wikipedia receives their money solely through donations to the non-profit Wikimedia Foundation, and Wikipedia does not host any ads on any of their pages. These policies help to keep private interests out of Wikipedia’s operations.

When used responsibly and in the way that is intended, Wikipedia is clearly one of the best ways to begin scholarly research on the Internet. It should not be cited as an authoritative source, but it does have several advantages:

It provides these things with a surprisingly high level of quality, as was reported in a 2007 PC Authority study, which concluded that Wikipedia’s information matches up to other online encyclopedias such as Britannica.com in terms of accuracy.

Wikipedia also arguably encourages more critical thinking than expert-driven reference texts, as its potential unreliability can lead students to do more fact-checking, question everything they read, and participate in critical discussion. While it may never gain everybody’s respect, people in the academic community should absolutely promote the use of Wikipedia for what it is – the most efficient, helpful way to become familiar with a topic and to start the process of research on the Internet.