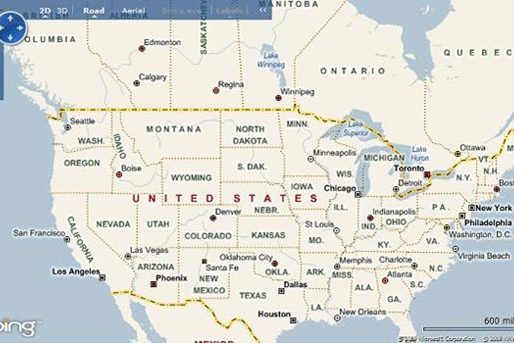 In an apparent attempt to compete with the reigning web map service, Google Maps, Microsoft’s Bing has recently added some new features. The new options will allow users to preview certain landmarks, buildings and streets in over 100 U.S. cities. These include the Gateway Arch, the Golden Gate Bridge and the Las Vegas strip. Known as Streetside, the feature directly compete’s with Google’s Street View tours.

Google’s Street View tours provide users with virtual tours of various landscapes in 3D. These tours span 50 countries across every continent. Now, through the use of the Bing Maps preview app, users can see detailed 3D views of over 125 cities worldwide. According to the Bing blog, some of these areas include Atlanta, New Orleans, Copenhagen, Vancouver and Disney World. The app allows users to switch between 3D and Streetside while pinching and swiping to get a comprehensive view of an area.

Should You Be Using Bing Maps?

The aerial views that Bing maps now provides cover about 1.9 million square miles. However, that still pales in comparison to everything offered by Google Maps and Google Earth. At the same time, it could be argued that Bing Maps works just as well as Google Maps when it comes to the basic functions that web map services provide: directions, zooming, places of interest, street names, travel times, etc. To get a look for yourself, you can go to this site to use both Google and Bing Maps at the same time while getting a side-by-side comparison. Also, back in 2012, PCWorld published a Google vs. Bing showdown using satellite images of landmarks such as Taipei 101, the Mendenhall Glacier and the Oropeza Mountains. Out of the 10 images compared, PCWorld found Bing to be preferable five times, while Google came out on top only once (four were ties).

The most recent comScore data, released in July, shows that Google still holds a massive majority of the search share at 67.6 percent. Microsoft had only 19.2 percent of the search market share, but that number was only 18.5 in March. It’s hard to predict whether or not the recent changes to Bing Maps will lure any more users in, but it probably could hurt.

What do you think? If Bing continues to add valuable features will they ever truly compete with Google? Or is Google just too far ahead?